The adoptive parent goes to visit a child in Nepal

This has been one of the hardest months in the history of our foundation, yet it has also proven to be special. For the first time since we started the “Adopion of Heart” programme one of our adoptive parents went to actually see the child. We were all very excited and moved. The boy wasn’t told about the visit but he was fully aware that there is someone who helps him. That someone is a person who is far and close at the same time .

Apart from being a massive joy such meetings are a huge responsibility on the part of the missionary as well as the visitor. What will happen after the visitor leaves is a big worry.
This issue has been pointed out a number of times to us by Aleksandra , the missionary and caregiver in Pharping.

“During every donor visit our children must be closely watched and , as hard as it may sound, they have to be brought back down to earth. Children dream. We all dream. However the space separating the caretaker and the donor is immeasurable and hard to imagine if you are not here with us.(…)
Sometimes when someone comes to visit our children they behave like when Indians in the old days saw the white man. Whatever the visitor was wearing, they would put on themselves to look alike or to get the impression that they are the same. Before I didn’t understand that it may actually be dangerous to let our children contact the “western” world. Is has to do with empty promises. In fact, no one promises anyone anything but the reality is that a child’s imagination goes its own way. One could think that they are being naïve but especially in case of the older kids and orphans they tend to think that if someone came to see them they must have money and they will take them home. We have had such situations and it takes us a few weeks to drag them out of the mental state that we call “the silliness of happiness”.

This time the meeting was short, just a couple of hours. We regret we couldn’t witness that. It was beautiful and touching. The boy was really moved by his meeting with his “Mr somebody”. The missionary says the meeting was different to what she had experienced before. The boy wasn’t left disillusioned and we are grateful to the donor for that.
Below is what the adoptive parent told us after the meeting:

During our stay in Kathamdu my friend and I decided to visit the kids from Karunika Tuition Centre and ,and see Arun in particular who’s a 10 year old boy I donate funds for. The missionary and the children from either very poor or not full families live in Pharping, which is located and hour drive from Kathmadu. We went there by bus.
On arrival, when we asked about Karunika Tuition Centre there was no one who could point us to where it actually was. After an hour of walking around we were about to go back when suddenly one of the girls gathered there said she would take us to the place. She would faintly say the name “Ola” a few times, which rang the bell, and we gathered that she is talking about Aleksandra therefore, we knew we are “home”. Later it turned out that the girl used to be Aleksandra’s pupil. When we arrived Aleksandra was very surprised and when we described the difficulties we had and that we came across the girl who used to be one of the Ola’s pupils she said we must have a good karma.
Ola is a very modest person and she doesn’t like to be taken photos of. As we met at noon all the kids were at school. Ola gave us a tour of Pharping starting with the place where her pupils stay. These are mainly two room spaces , the bottom one is a threshing floor with a fireplace, plastic containers for water, pots and bowls and there is one above, which you get to by climbing a ladder, where the child sleeps usually with their parent due to lack of space. There is no electricity or plumbing. Then we visited a few Buddhist chapels. In the whole of Pharping you can still see the consequences of the 2015 Earthquake.
After we returned we had dinner with Ola and Manuka ( Ola’s Hindu helper) and then the kids started coming. At Ola’s place they are provided with the space for studying and play. They are given a warm meal as well as music lessons. A teacher comes and teaches them how to play musical instruments.
I met ‘my’ Arun – a shy boy , slightly backward due to earlier malnutrition and lack of vitamins . Yet, he is a hardworking boy showing interest in football and music.
Arun gave us a small presentation of the local folklore that he had been able to learn at Ola’s place. We were given handmade scarves and bracelets made by local women activated by Ola. She sometimes manages to sell those to support their daily budget for running the home.
As we had to head back and catch the return bus we were not able to see all the kids. We promised to continue supporting Ola in what she does and hat is an amazing job and she rightfully deserves a lot of respect for that. One can only respect such a person who took up such a task at the expense of such sacrifice. Once again we would like to express our respect for her!.

I have just received a great news that all the kids have passed  their school exams and are in their next grades and Arun had the highest result ;-)

If you are willing to become one of our adoptive parents in Nepal ( or other country) please click the following link: 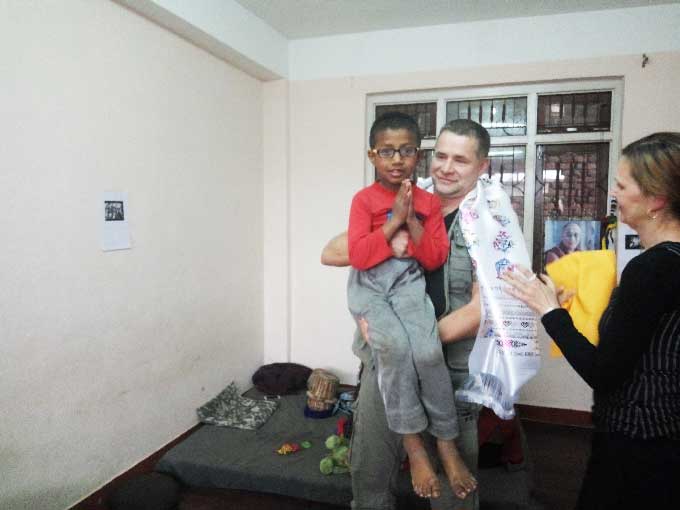